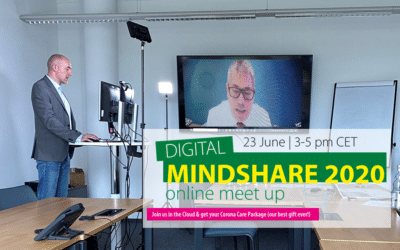 Every year, Mindshare is a highlight for cryptovision and the entire industry - with a great conference program and the hottest party of the summer. But this year? Due to Covid-19, many things are different at cryptovision at the moment, and so having Mindshare 2020... 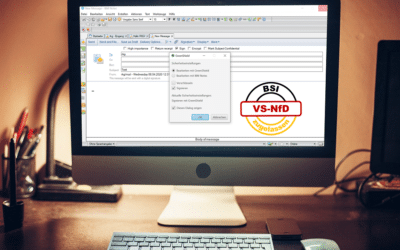 Dealing with VS-NfD classified information is much easier if you can send it by e-mail. However, this is only permitted with a VS-NfD-approved encryption solution. GreenShield by cryptovision is one of the few products that meet this requirement. GreenShield not only... 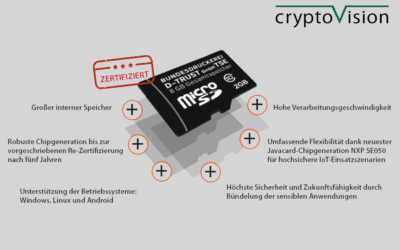 Securing cash registers in compliance with the law: cryptovision-TSE certified

Retailers and restaurateurs need to upgrade. The Kassensicherungsverordnung (KassenSichV) [Cash Register Security Ordinance] requires them to equip their cash registers with cryptographic security mechanisms that prevent tax fraud. The focus here is on a so-called... 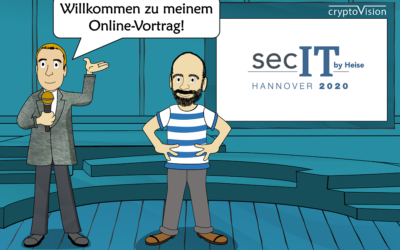 The SecIT 2020 in Hanover was to become a real highlight for cryptovision. Klaus Schmeh, Chief Editor Marketing at the Gelsenkirchen-based specialist for cryptography and electronic identities, was booked for a lecture, where he was to be on stage together with Bruce... 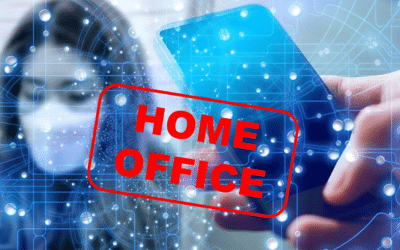 "I'm at the home office right now." As good as everyone has heard that phrase several times over the last few days. No wonder, because in the times of the coronavirus, working from home is as much a part of everyday life for many people as breathing masks and empty... 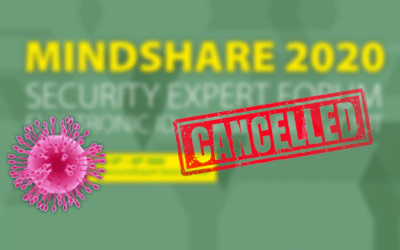 Mindshare 2020 cancelled due to Corona virus

It is with great regret that we have to announce the cancellation of this year’s Mindshare Conference. In the current situation, due to local restrictions as well as our own assessment, it is not possible to have our annual event in Gelsenkirchen. We very much care...

Gelsenkirchen, 21 May 2019 – cv cryptovision GmbH, leading experts for modern cryptography, is launching a new e-mail and file encryption software: GreenShield. The solution enables authorities and companies to encrypt and exchange confidential content at the VS-NfD security level. The German Federal Office for Information Security (BSI) has approved GreenShield as the only e-mail and file encryption software for the transmission and processing of national classified information up to and including VS-NfD, NATO Restricted and EU Restricted. cryptovision is represented at the German IT Security Congress of the BSI in Bonn, which starts today, and will present the new software there until Thursday.

GreenShield Suite is a complete solution for encrypting and signing emails and files in seconds. It uses end-to-end encryption with the strongest encryption methods currently available. GreenShield Suite consists of the products GreenShield File and GreenShield Mail. With GreenShield File, files can be encrypted and securely stored in the familiar working environment. GreenShield Mail integrates itself into the respective e-mail systems and thus enables the secure processing of e-mails including attachments. Both components are based on the same security kernel approved by the BSI, which allows the integration of defined security tokens.

Extensive expertise for the VS market

Since its foundation in 1999, cryptovision has been exclusively concerned with encryption technology and has developed the VS-NfD-approved e-mail security solution s/mail. cryptovision has incorporated this expertise into its successor solution GreenShield.

cv cryptovision GmbH is one of the leading specialists for modern, user-friendly cryptography and solutions for secure electronic identities. With its products and complete solutions, 250 million people worldwide and a multitude of institutions in the digital world protect themselves against hacker attacks, manipulation, misuse of identities and espionage. cryptovision addresses various industries such as public administration, health, automotive, finance & insurance, energy or IT. Its customers include countries such as Nigeria, Ghana and Ecuador, institutions such as the German Armed Forces, the German Federal Office for Information Security (BSI), the city of New York and companies such as E.ON, VW and Allianz. cryptovision was founded in Gelsenkirchen in 1999 and is managed by co-founder Markus Hoffmeister. In addition to Hoffmeister, Bundesdruckerei GmbH and tbg Technologie-Beteiligungs-Gesellschaft are also involved in cryptovision.

The first Jacolyn-based solution from cryptovision is a so-called Technische Sicherheitseinrichtigung (TSE) for cash registers to protect against manipulation. The TSE is developed in cooperation with Bundesdruckerei GmbH. From 1 January 2020, electronic cash register systems must have a TSE certified by the Federal Office for Information Security (BSI) with a security module, a storage medium and a universal digital interface.

The TSE from cryptovision, which is mandatory for the protection of cash registers, contains a security module consisting of the CSP Jacolyn and the “Security Module Application for Electronic Record-keeping Systems” (SMAERS) as well as a memory module and a universal digital interface for integration into the cash register software. SMAERS and Jacolyn are in the legally required certification process. Preliminary approval by the BSI is expected by the middle of the year. On the basis of this approval cryptovision can deliver a legally compliant solution from the fourth quarter of 2019.

“The regulatory framework of the Kassensicherungsverordnung and the requirements of the BSI for a TSE are extremely demanding. We are pleased that cryptovision as one of the first certified TSE suppliers can contribute to the timely implementation of fiscalization solutions,” says Markus Hoffmeister, CEO of cv cryptovision.

With Bundesdruckerei and other partners, cryptovision offers both versions of TSE for the implementation of the Kassensicherungsverordnung (KassenSichV): both token-based in the form factors µSD, SD, USB and for central solutions as firmware extensions for HSMs.

Cryptovision has more than ten years of experience in cash register security. Among other things, the company was significantly involved in the previous version of the cash register fiscalization, INSIKA, as well as in the development of the TIM module. Solutions based on INSIKA have already been successfully introduced to protect against manipulation of taximeters.

Jacolyn is currently certified according to the corresponding Common Criteria Protection Profile BSI-CC-PP-0104-2019 at level EAL 4+, the SMEARS application at level EAL 2+.

The first implementation of Jacolyn is based on the latest generation of Secure Embedded Elements for local use in integrated systems and IoT devices. In parallel cryptovision develops a firmware extension for hardware security modules (HSM) for central, cloud-based deployment scenarios.

Veronica von Preysing (46) has been Senior Vice President Marketing at cv cryptovision GmbH in Gelsenkirchen since April 1, 2019. There she heads the marketing and communications team. Von Preysing (formerly Atkins) comes from the identity platform Verimi, where she was responsible for public administration. She previously worked for the agency Krowne Communications, where she was Director Consulting. In addition, von Preysing headed corporate communications at Bundesdruckerei GmbH for four years.

When Federal President Frank-Walter Steinmeier goes on a business trip, there is always a troop of other politicians and business representatives with him. This was also the case when the German head of state paid a state visit to the African countries of Ghana and Gambia in recent days. He was accompanied by Federal Economics Minister Brigitte Zypries and former Schalke footballer Gerald Asamoah, who was born in Ghana. The delegation also included some 15 top managers from German companies, including Markus Hoffmeister from Gelsenkirchen.

Hoffmeister is the founder and managing director of cryptovision, a company based in Gelsenkirchen’s Science Park. cryptovision specializes in electronic ID cards – a technology that is currently in great demand in developing and emerging countries. “Such countries often have a lot of catching up to do when it comes to registration of residents, the banking sector and digitisation,” Hoffmeister knows. “An electronic ID card is often an important prerequisite for modernization. The African countries Ghana and Nigeria have therefore started projects with cryptovision technology to supply the population with such ID documents.

Frank-Walter Steinmeiner and his delegation first travelled to Ghana. There the issue of electronic ID cards with cryptovision technology has already started. This trend-setting project is attracting more and more people in Ghana – numerous government representatives spoke to Hoffmeister about it. The Ghanaian provider Margins Group, partner of the government and actual customer of cryptovision, was involved in the state visit. The same applies to the women’s rights activist and Ghanaian telecommunications minister Ursula Owusu, who is closely associated with Hoffmeister’s company. She knows Gelsenkirchen, because this year she took part in the annual cryptovision conference Mindshare in the Science Park.

On the travel program stood among other things an encounter with the project Lionesses OF Africa . In the last three years, this initiative has made 500,000 African women self-employed. Hoffmeister was particularly impressed by the young entrepreneur Farida Bedwei, whose company Logiciel supplies about 250 banks in West Africa with financial software. The ID cards developed by cryptovision are likely to play an important role for Logiciel in the future, as they can also be used as payment cards and password replacements on the Internet.

From Ghana the delegation went on to Gambia in the far west of Africa. Since the beginning of 2017, the state, which has two million inhabitants, has been ruled by President Adama Barrow, who succeeded the long-time dictator Yahya Jammeh and is considered to be the bearer of hope. Frank-Walter Steinmeier’s visit to the Gambia was intended to support the country’s hoped-for transformation into a democracy.

Markus Hoffmeister was also able to make valuable contacts in Gambia. He was particularly enthusiastic about the reception the delegation was given there: “Apparently the whole country was on its feet. At the roadside there were people everywhere who waved flags at us and shouted ‘wonderful’.

After almost a week’s journey, the Federal President and his companions returned to Germany. Markus Hoffmeister was satisfied: “The trip was very interesting from a business point of view, but also an unforgettable experience”. He found the flight in the Federal President’s plane just as exciting as the discussions with other delegation members who are active, for example, in medical technology or the fruit trade. Hoffmeister was impressed by the organizational effort that was made. “The Office of the Federal President meticulously prepared every detail, no matter how small. Even the question of who is standing where was precisely regulated in advance for each appointment”. 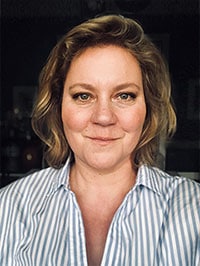