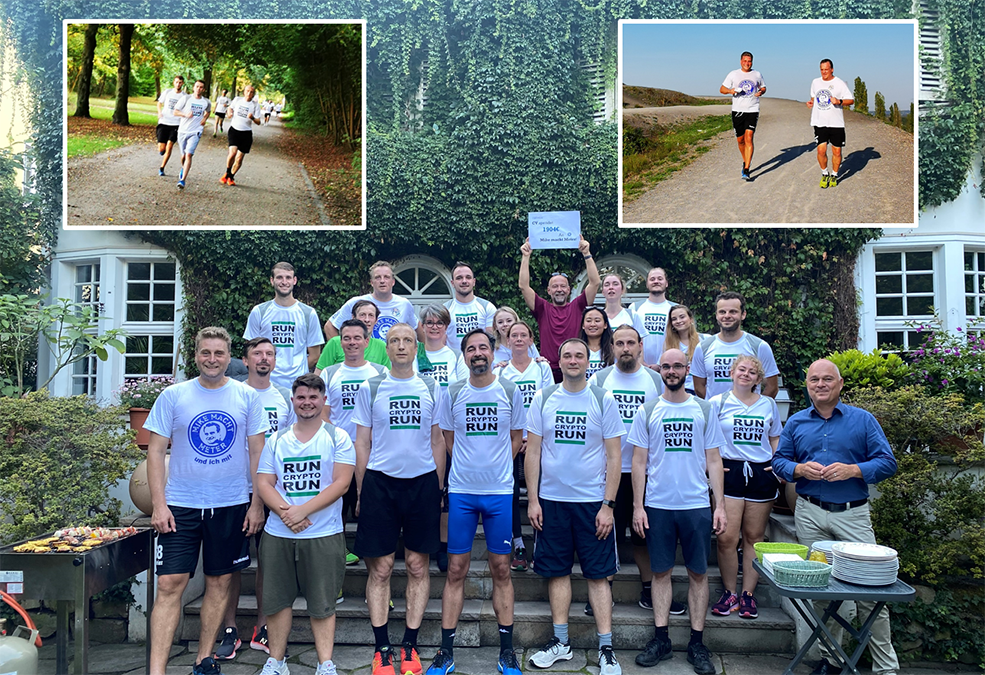 More than 100 kilometers run, 1904 Euros for the Mike macht Meter campaign and lots of fun – that was the result of cryptovision’s company run “Run Crypto Run”, which took place yesterday for the first time.

The company internal event came about after the B2Run, an annual running event with over 3,500 participants, in which cryptovision traditionally participates, was cancelled due to corona. cryptovision took the matter into its own hands.

As partner and participant of the “Run Crypto Run”, cryptovision managing director Markus Hoffmeister was able to win over his long-time friend and ex-football professional Mike Büskens, who won the UEFA Cup with Schalke 04 in 1997. Büskens, who lives in Gelsenkirchen and is still closely associated with the club, initiated the aforementioned Mike macht Meter (“Mike makes meters”) project a few months ago. This project collects money for various social organizations and institutions in Gelsenkirchen – including the homeless aid organization Warm durch die Nacht.

When the starting signal was fired yesterday, Tuesday at 5:30 pm in the Von-Wedelstaedt Park in Gelsenkirchen, 30 employees and friends of cryptovision set off on the optional five or three kilometer route at 31 degrees air temperature. Past the science park and over the nearby Rheinelbe coal dump with the well-known “Stairway to Heaven”, the course finally led back to the starting point, where urgently needed cool drinks were served at the finish.

Of course, a subsequent barbecue party was not to be missed. On this occasion managing director Markus Hoffmeister handed over a cheque to ex-Schalke professional Mike Büskens for his aid project – in the amount of 1904 Euro, which is almost without alternative for Schalker.

Anyone who also wants to make meters themselves and support the Eurofighter aid project can do so at any time. All you have to do is cover one distance continuously and then donate 04 EURO or more per kilometer – via Paypal or bank transfer (mike.macht.meter, DE22422600010116335402). Büskens guarantees that the incoming donations are used to 100 percent to help people. “As part of a constantly growing movement, we want to do good for people in Gelsenkirchen and for our health,” says the former professional footballer. “Everybody join in, join me in the meter!